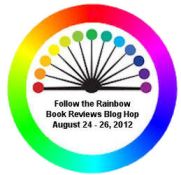 Welcome Blog Hoppers! Thanks for helping us kick off Rainbow Book Reviews. Our member bloggers are talking about what LGBTQ means to us. My roots in it are a little odd.

I started writing LGBT literature without any deep reasons.  I liked to read m/m romance, and why shouldn’t I write what I’d like to read? I think I tell a reasonably good story, and it’s a challenge to do better with each piece.

But that’s not why I keep writing m/m romance.

There is someone dear to me, from whom I was estranged for far too long, a family member whose complete story is not mine to tell. For brevity’s sake, let’s call him Rick, his name from a role-playing game long since forgotten by the rest of the world. And It was my great good fortune to reconnect with him very early in my writing career, when I had a few pieces out, and was idly considering what to write next. Maybe something with lots of ass-kicking girls in it.

Now, Rick had never been much of a reader. I’ve always found this frustrating, since books were my best cheap transport out of a little town in the middle of nowhere, and damn but he wanted out of there. I’d shove what I thought was escape into his hands, and he’d leave it under the remote control. In the course of this reconnection, in a big city a thousand miles from where we’d begun this conversation, he finally told me why.

“Because none of your books were about people like me.”

I’d offered him classics, I’d offered him pulps, I’d offered him historicals, mysteries, and science fiction. Of the thousand books I read before I got out of Nowhereville, only one had a hint of gay/bi characters, and I’d learned to stop offering books he’d only abandon long before I read Time Enough for Love. And I didn’t know then that Heinlein’s book, at least the Tertius section, might have been what he needed.

What followed was notable in our history of excruciating conversations, right up there with me getting to explain sex to him back in the day. (It briefly crossed my mind that my dreadful thirteen-year-old’s explanation had grossed him out about girls to a life-altering degree.) But I got a grip, and explained that I wrote romance. Even non-readers can have genre-contempt, but that lifted brow changed shape when I told him the couple’s names were Kurt and Jake.

All of a sudden he was interested. “Do they get a happy ending?”

When we finished cringing, I admitted this was so, and of course, the excruciation factor doubled, because now, for the first time in memory, Rick wanted to read.

All the things he’d never mentioned because he didn’t want people thinking about relative to him were going to get blatantly displayed as having gone through my mind and out my fingertips. But if Rick wanted to read, I’d give him material. With a firm admonition that no matter whether I’d gotten the explicit scenes really right or really wrong, I didn’t want to find out from him, I downloaded my work to his computer.

Some time later, he gave me the only literary criticism he’s ever offered, but it was the remark that mattered most to keeping me writing m/m romance.

“Is there any more?”

I’d like to share some of the “more” with you. Leave me a comment For a chance to win your choice of Fire on the Mountain or Snow on the Mountain, which are now out from Dreamspinner, all expanded, revised, polished, and with bonus stories included.

Is there a series where you’re anxiously waiting for “more”? Tell me, and then keep hopping with more great authors and publishers!