Hello! Thank you to PD Singer for hosting me today! This is the last stop on my blog tour, and I have something a little special for you: a photo tour of the area where Homespun is set! This is also your last opportunity to enter my giveaway for a hand-knit scarf (your choice of material and colors) by commenting on any of the posts in my blog tour. This would also be a great holiday gift for someone else! More details here: http://laylawier.wordpress.com/2013/09/09/scarf-giveaway/

My Dreamspinner Press novella Homespun is set in central New York state, and today I’ll be giving you a photo tour of the area.

Much of my location research for Homespun took place around Ithaca, where my sister lives. Here’s a Google map showing the approximate locations of Ithaca, Syracuse and Utica. 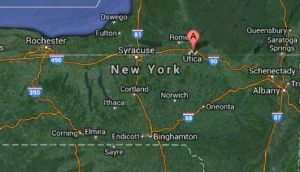 Between these small cities there is a large expanse of low, rolling hills with woods, farms, and a network of state and county highways. Somewhere in this area, the fictional small town of Hazel, NY is located, where Owen and Laura have their sheep farm in the book.

(All pictures were taken by me.)

Like I’ve mentioned in other posts, my sister was happy to help me research Homespun and we drove across the area between Ithaca and Utica to get a feel for it. The drive was absolutely beautiful; it was autumn, near sunset, and the fields and small towns were lovely in the long golden light. That was the drive on which I collected most of my location ambiance for the area around the farm. Unfortunately this also mean that I have a limited pool of pictures that came out clear enough to post, since it was nearing dusk and many of the pictures I took came out blurry.

Here is a crossroads in a small town probably not too unlike Hazel:

We passed so many interesting, abandoned old barns. Sometimes we’d see a barn that had been converted into some other kind of business. I never got to mention this in Homespun, but the service garage in Hazel where Owen works part-time is inside a converted barn not too different from this one. 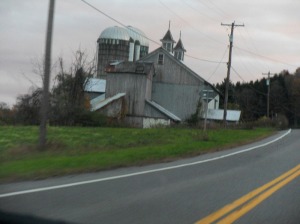 Here’s a little more of Owen and Laura’s pastoral world:

(Well, at least the version of it that you see from the car at 45 mph at dusk.)

And one more blurry old barn, because who doesn’t love old barns: 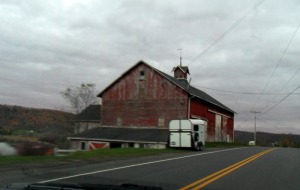 The climate around Ithaca is slightly different than that of the more east-central part of the state because it’s on a lake, but it’s still close enough that I was able to explore Ithaca to research plants and trees and the general sights/smells/sounds of a New England autumn. 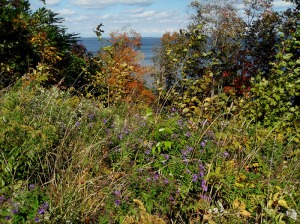 Wildflowers and weeds in an overgrown field in the farm country outside Ithaca.

And here’s one of many rural roads around Ithaca, very like the little country roads that I imagine around Owen and Laura’s farm.

I hope you enjoyed this tour of the Homespun world! If you’ve already read the book, this will give you some visuals to go with it, and if you haven’t read it, I hope you might be intrigued enough to find out a little more about it.

For twenty years, Owen Fortescue, a down-to-earth farmer in upstate New York, has had an on-again, off-again relationship with volatile New York City artist Kerry Ruehling. Now that same-sex marriage is recognized in New York, Owen wants to tie the knot. But Kerry responds to the proposal with instant, angry withdrawal. Owen resolves to prove to Kerry that, regardless of the way his family of origin has treated him, family ties don’t necessarily tie a man down. With help from his grown daughter, Laura, who loves them both, Owen hopes to convince Kerry that his marriage proposal isn’t a trap, but a chance at real love.

Layla M. Wier is the romance pen name of artist and writer Layla Lawlor. She was born in a log cabin in rural Alaska and grew up thirty miles from towns, roads, electricity, and cars. These days, she lives in Fox, a gold-rush mining town on the highway north of Fairbanks, Alaska, with her husband, dogs, and the occasional farm animal. Their house is a log cabin in a birch and aspen forest. Wolves, moose, and foxes wander through the front yard. During the short, bright Arctic summer, Layla enjoys gardening and hiking, and in the winter, she writes, paints, and draws.

Where to find Layla:

3 responses to “Welcome, Layla Wier with her “Homespun” tale”