I spent a week in InDesign bootcamp with Dean Wesley Smith about a year ago, and ever since then I’ve been sensitized to book design. Unfortunately, that means an improperly placed running header draws my eye, and overwide indents are like fingernails on chalkboards.  But when I run across something well done, it makes me smile that much wider.

The Marital Unit bought a book recently that got my attention. He doesn’t like flying all that much, but this book made him feel a bit better about thrust and lift overcoming gravity and drag to get him where he’d like to go. And damn, is the design good. 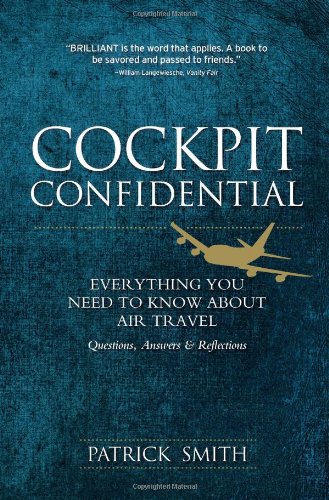 This is a nifty non-fiction cover. Most of the print is in Trajan, which is a dignified serif font. It’s popular, familiar, and very legible. It’s a font that gets around.

There are two other fonts on here, which is okay because they’re separated widely, with a conservative sans serif font for the pull quote, and a serif italic for the title tag line. There’s not a lot of other adornment, just some rows of dots that probably have a technical name, and the outline of the plane. On the hard copy, it’s a raised foil design for some tactile interest, all on a lightly textured background. The whole design screams “This dude knows his stuff.”

This book came from Sourcebooks, and I wouldn’t have noticed the publisher had I not wanted to know who cared enough to do headers like this: 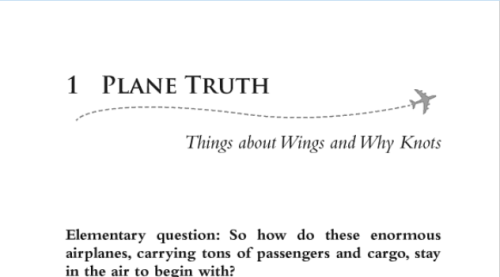 It’s just a simple  graphic that echos the front cover, with some thought as to titles. With a pun. New fantasy, sitting around making puns with Russell Crowe.

There’s a tiny airplane at the ends of chapters too, about a 12 points high. I couldn’t gank it off Amazon, sorry, but where there’s a colored text box at the end of chapters, the airplane lurks in the corner. The text is in question and answer format, with the questions 1 point bigger and bolded. Simple and  cohesive.

The MU devoured Cockpit Confidential and urged me to read it too. I’m only a  few pages in, because I stopped to be delighted with the layout and cover. My weekend was spent formatting the print version of  Diversion for Eden Winters, so interior design was at the forefront of my mind. I’m proud of the way Diversion came out. Everyone gets to see it in about a week. 😉