Joe the Giant Cat thinks I need close supervision when I build a book. Right now he’s concerned that I get Eden Winters’ print version of her fabulous novelette Highway Man just right. He’s making sure I have the interior just so, although he and I disagree on whether his contributions constitute typos. He was quite miffed that I removed them all before making the interior PDF, and jumped back up to help me upload the cover and interior files. He’d already pressed his nose against the screen to put his stamp of approval on the cover spread.

The laptop has the uploading screen on it–I don’t like to use the Mac for tasks where the mouse is supposed to go a particular direction. It also has Eden’s chat box, which means she’s supervising too. Rocky Ridge Books is a joint effort, and she keeps me on task. (Oh look! Squirr–thunk!)(Actually, Eden’s a Southern gal and wouldn’t swat me. She’d say, “Having trouble concentrating? Oh, bless your heart.” Then I’d wish she’d only swatted me.)

So, what have we wrought? Only a lovely 60 page print version of Killy and Tex. We’ll assess the proof and bring this paperback live as soon as we’re both satisfied, and in the meantime, you can have your choice of MOBI, EPUB, or PDF at All Romance eBooks or for Kindle at Amazon. 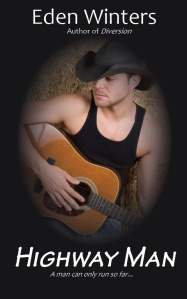 Killian Desmond’s dreams died in a flash of pain and the scream of twisted metal. He lost it all the night a tour bus sailed off a mountainside, sending his band—with his brother—to their deaths.

Killian is dead too, if the papers are to be believed, and living a half-life of odd jobs, rodeo rides and pick up gigs. The road that once meant freedom is now Killy’s exile. No strings, no ties, no names for the one-night stands.

Answering a tribute band’s ad thrusts him face to face with his past, and into the arms of the one man who just might understand.