Rainbow Awards and A New Man 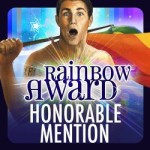 The Honorable Mentions are appearing, a few at a time, at Elisa Rolle’s site. Every day brings a fresh reason to rejoice, as a friend or colleague’s work is honored. Amazing authors like Lloyd Meeker and Edmond Manning, Raine O’Tierney and Christopher Hawthorne Moss, and so many others who deserve every single accolade. Z. Allora, whose work has appeared twice. JL Merrow, who always makes me smile. Lane Hayes, who had a kind word for the socially anxious.  So many folks whom I’ve met online or in meatspace. My TBR list is expanding exponentially too, because there are names new to me in this gallery of goodness.

A New Man captured the judges’ attention and hearts sufficiently to be included on these shelves.

The reviewer (whoever you are, thank you) said:

I got sucked into this story very quickly. Great characters, including those who weren’t the MCs, and I liked the way the issues they faced weren’t solved quickly which made it more realistic.

I am honored and humbled to appear in this lineup.

This entry was posted in A New Man, Writing and tagged Rainbow Awards. Bookmark the permalink.

2 responses to “Rainbow Awards and A New Man”