Jessewave has a copy of Blood on the Mountain to give away today. Sign up here! (And be patient–the site’s loading slowly because of holiday traffic.) There’ll be another copy Saturday in Wave’s Big-Assed Holiday Giveaway, plus a chance for your choice of the other Mountain novels and a copy of The Rare Event.

In other news, Blood picked up a lovely tribute from a reader (you can see the original at Amazon).

What’s not to like about this book. Yes it can be read without reading the others, but in combination it makes a very good read. The struggles and surprises along the way left me emotionally charged.

I’ve had my partner read the first 2 books and he don’t seem to want to put them down. The commute to work don’t seem long enough for him.

The coggles of my heart are particularly warm today.

We Were There! Venues from The Rare Event

Part of our walking tour of New York City involved either visiting sites that I mention in The Rare Event, or peering at them from a distance. It was rather strange to walk around knowing that these are Ricky and Jon’s haunts.

Just because of our route, the first place in the story that we located was the hardware store where Ricky urgently needs to buy something at midnight.

Even in NYC, Home Depot, or “Homo Depot,” as Flatiron Mike called it, on 23rd Street, closes at 10pm. Ricky ended up at Nuthouse Hardware, on 3rd Avenue.

Farther up 6th Avenue, we found Ricky’s apartment building. He has about 600 square feet here, for around $4000 a month. I get a little queasy thinking about that.

From the top of the Empire State Building, Eden and I waved at some other venues. At the south end of Manhattan, we could see the financial district, although my knowledge of the area isn’t enough to let me pick out the  Manhattan Life Insurance Building, which contains the offices of Wolfe Gorman Equities and Araucaria Hedge, other than to say that it’s about in the middle, about 5 blocks from the shore. 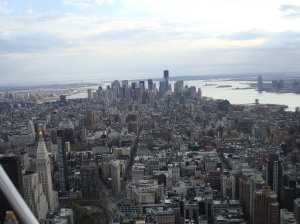 And looking north toward Central Park, we could see the building with the Hogenboom family apartment, where Jon grew up. It’s the tall brown one.

And of course, we had to find where Jon lives. It’s visible from the top of the Empire State Building, and has come in for some potshots for being modern glass and aluminum construction.

All of these venues were only places on a map for me until this trip: it’s very different to see the places “in the brick.”

Those three things go together, right? Louisa Bacio has kindly let me post some thoughts on subtextual messages on her blog, which you can find here.

Lisa of the Novel Approach devoured this big honker of a book and instead of indigestion, she had the nicest things to say! Five stars and some perceptive comments — she understood exactly what I was trying to do with Ricky and Jon.

What was entirely essential was the way in which Ricky and Jon collaborated and conflicted with each other, and eventually, the way in which that connection suffered under the weight of the odds of the gamble. If there’s such a thing as profiting from loss, Ricky did it, and it was both painful and lovely to witness.

The rest is here: The Rare Event by P.D. Singer.

I’m  supposed to go to bed now, but I’m floating about 6 inches off the mattress.

Eden Winters is hosting my thoughts on exclusivity, dating, and deciding today. Ricky and Jon from The Rare Event open the book already knowing and dating one another — there’s two years of backstory that I didn’t put into an already large novel.

Check here, and see what other news Eden has.