This is the very first complete print set of Z. Allora’s Club Zombie books! Those gorgeous covers are PL Nunn’s artistry, and the stories inside are Z. Allora’s rainbow-inclusive tales of the zombies who are effectively immortal as long as they get their daily dose of “male essence”.

Why do I have my set and you guys don’t–yet? Mine say “Proof” at the back, and are how we determine the books are beautiful and ready for release to the public. As the typesetter for Rocky Ridge Books, it’s my job to make sure the packaging is worthy of the story. If there’s an oops, it’s on me to keep it from seeing the light of day.

And while I set the book up, I get to read the story. 😉 Cassidy’s a supporting character in the first two books, and now he has his moment in the spotlight. (The books are linked, but read fine as standalones.) He’s been surviving as an unmated zombie for a very long time. That has a lot of drawbacks, poor fella, and if Erick doesn’t fully bond with his mate, he’ll get to experience all of them. How he expresses his nonbinary identity will make a huge difference to Cassidy. Z. doesn’t make it easy for her characters.

So I’ve kerned and leaded and adjusted hyphenation and all those fiddly things that make a print book be a seamless, pretty container for story, and we now have three matching volumes of Club Zombie tales.  Page one of Zombies Coming looks like this:

You’ll want to read the rest.  In MOBI or EPUB too, if you prefer ebooks.

Club Zombie is a safe haven for people like Cassidy Frost. Zombies suck—but they’re not after brains! Forget mindless rotting corpses shuffling along. These zombies are young, hot, and looking for their mates.

Cassidy, who wrote everyone else’s happily ever after, had all but lost hope he’d ever find his own. Every night he sucked until his jaw hurt, praying for his other half more out of habit than faith his mate was out there. He didn’t dare hope fate would drop his mate into his lap.

Erick McGrath stumbled and landed in the arms of a beautiful angel. Though he must be dreaming, because he learned how cruel and short life could be when he lost his brother. Despite his parents’ toxic attitude, Erick starts to accept his nonbinary gender identity. Going to Club Zombie’s Drag Night is his first attempt at embracing his new grasp at freedom.

But Cassidy and Erick will have to take risks to have what they desire.

(Zombies Coming is part of the Club Zombie series but can be read as a standalone for a perfectly happy and satisfying ending.)

Z. Allora with Lock and Key

Welcome, Z. Allora, with the latest installment of a story in the Dark Angels world.  If you’ve been reading that luscious series as I have, you’ll recognize the younger brothers of the band. Lock and Key stands alone, and I’m ready to read  Zack and Andrew’s scorching story.

I want to thank Pd Singer for hosting part 6 of Lock and Key’s blog tour. I’m indebted to Pd Singer for also being one of my critique partners who saves readers from my squirrel speak and stops my abuse of the English language.

Part 5 can be found at https://diversereader.blogspot.com/

Stopping to get his younger brother a hot chocolate had been a mistake. Jordon hadn’t stopped yammering for the last thirty minutes. Zack had given up trying to follow the train of Jordy’s crazy as it zoomed from one station to another.

The image of his older brother standing next to his hot boyfriend waving good-bye was embedded in Zack’s brain. He’d never be Dusty. His older brother had it together: he was out, had a boyfriend who seemed really nice and was living the rock and roll dream as a drummer. Everything seemed to fall into place for him.

Zack wasn’t jealous. He was glad for Dust but it must be incredible to just… well be! No hiding, no pretending, and just be yourself.

When Jordon took a breath Zack jumped into the fray. “So um, Jordy, you know we can’t tell Mom we met Dusty’s boyfriend.”

“I know. But ah, I want one of those! God, Zack. Dusty’s boyfriend was pretty!”

There was no avoiding this conversation. “I know Jordy, and I think that’s fine. But please keep your sparkle and rainbow lust under wraps.”

Zack hated himself but begged, “Just until after high school. Please, Mom would—”

“I don’t care. What about my feelings and what I want?” Jordon huffed and glared out the car window.

What about me? Zack slammed that self-indulgent question back to the recesses of his mind as soon as it attempted to seek an answer.  No way could he contemplate his needs. He focused on Jordon. “It’s just two more years. Then you’re out of her house and at college.”

“Yeah, easy for you to say since you graduate in June!” Jordon pointed out.

Ha! Jordon had no idea how Zack could never be himself… gay was only part of what he needed to hide.

Part 7 will be found at https://becausetwomenarebetterthanone.com on July 1st. 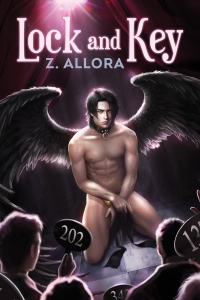 Lock And Key by Z. Allora

Zack Davis wanted to serve only one man, Andrew Nikeman. He was denied because Andrew thought he was too young and because their brothers were together. So Zack crushed his submissive tendencies and focused on being the perfect Dom, giving every sub he played with something he couldn’t have.

After years of denying his submissive side, Entwined’s charity auction “Are you Dom enough to be a sub?” gives Zack an excuse to get a little of what he’s always craved.

Andrew doesn’t know when his infatuation turned into more, but it kills him to see Zack with a constant parade of submissives. He’d refused to jeopardize his brother’s relationship or become Zack’s regret; however, Zack isn’t a kid anymore, and his brother’s relationship is unbreakable. Now Zack’s popularity and success as a Dom might ruin Andrew’s dreams of collaring him, but he can’t wait any longer to confess his feelings or he risks losing the man he loves forever.

Please follow the rest of the blog tour. You can find the schedule at http://zallora.blogspot.com.

Recent adventures, or what happens in Vegas, Part 1

This last month has been kind of strange, between all the bits of life and a week long trip to Las Vegas for RT.  That’s Romantic Times, and if you’ve never seen 3100 avid bookhounds in one place, you’re an RT virgin too. Sometimes I thought they were all in line at once.

This was my first time, and it was an amazing experience, what with seminars conducted by amazing authors and industry professionals, and parties where we danced into the night. So much fun!

While we were in Orlando, our Dreamspinner darling Poppy Dennison coached the RT virgins on what to expect, which I greatly appreciated. A side effect was a major panic attack over my wardrobe, which, shall we say, is a bit unsettled right now. I recently did the KonMari thing and got rid of everything that either didn’t give joy or didn’t fit, which was a killjoy by itself. Consequently, the drawers and closet weren’t providing a lot of inspiration, because I tend to the very casual. Maybe I should rephrase that as “I’m doing well to be dressed top and bottom, with shoes that match.”

The solution was tagged several times on Facebook, thereby inadvertently giving the impression I didn’t change clothes for a week, unless you look carefully and notice sleeves, lace trim, and long hemlines appearing and disappearing. I trimmed the all-black ensembles with a shawl given to me by the incomparable Z. Allora. Her birthday gift to to me was a lovely rainbow pashmina. Since rainbows define what we’re all about, she kept me stylish, and depending on the room, warm. The AC was a little erratic.

Between the hair and the shawl, I think everyone knew who I was. Thank you, Z!

You’d think after all these years that I’d know myself better than to make resolutions. The damned things die off in a week or a month, and little changes.

My name at work is Pam Hasalist Singer, and my varied collections of information make me the go-to person for all kinds of questions. [Wait, is this really a good thing?] Also, if I have a to-do list, the sheer joy of checking things off gets me to do things that I would be inclined to blow off. My lists are the only reason the insurance gets paid or the empty milk bottles go in the box.

So, forget resolutions. I will write lists instead. In ink. Make them bright and bold and not to be trifled with. You probably don’t especially want to know about Wednesday: 8 AM Ass in gym, but some stuff you might be more interested in.

A) Do stuff
All kinds of stuff. Write things, publish things, design things, try things, succeed at things, fail at things. Failure is always interesting: daring to suck pushes boundaries. And you might succeed.

B) Tell you about stuff I do.
I really do know how to blog and tweet and Facebook (Although FB has been failing me for a while and has more failures in store because they’d like to extract money from me for telling you stuff. ). If I add this to the Saturday list, it will get done. See how easy that was? Fifty-one more times and it will be accomplished.

C) Tell you about stuff I did.
Um, there’s a backlog here.  You have no idea how big a backlog. Which has to do with me doing an awful lot of A and not so much of B.  Add to Saturday list. Or Wednesday list. Or both. There’s a BUNCH.

Let me start with a something that I’m really proud of. This has been months in the making, between Z’s writing and all the other tasks necessary to get the books ready to typeset. PL Nunn created the awesome front covers, and I, the Rocky Ridge Books typesetter, kerned all those angsty, sexy words and wrapped them in purple and teal. Now you can have Z. Allora’s hot rockers on your bookshelf.

Get your own–these are mine. Mine! Sitting on my black leather sofa like proper rock stars! And Z signed them! Bet she’d sign yours too. 😉